Running in the rain

Just as I was finishing my business in the toilet, I heard the rain’s soft platter.

Really now?! I mumbled to myself. 3.45AM. In five minutes time, I was due to set off for my morning run. And now this rain.

Its not going to stop me. I vowed even as the pretty face of my friend Uwineza swooped into my mind. She has previously warned me not to run in the rain. You will fall sick. She insists. I did fall sick one year ago after walking in the rain at Eastleigh. We had gone there with her for our irregular Eastleigh shopping. We are both addicted to green cardamom in our tea, and Eastleigh is the only place where we can find it.

I brushed aside Uwineza’s face and warning as I walked out of my gate into the moist, cold arms of 3.51AM.

The drizzle’s feathery touches feel so damn good. I thought as I readied to start running at Kamuti’s butchery. That was always my starting line. I clicked start on my running app. My shoulders stooped forward as I took a deep breath and shot forward my right leg.

After run-walking for two kilometers, I came across a sight that I just has to capture with my phone camera. Someone was sprawled outside a Chemist’s door, deep asleep. Is he homeless or is he just a night security guard stealing some sleep? 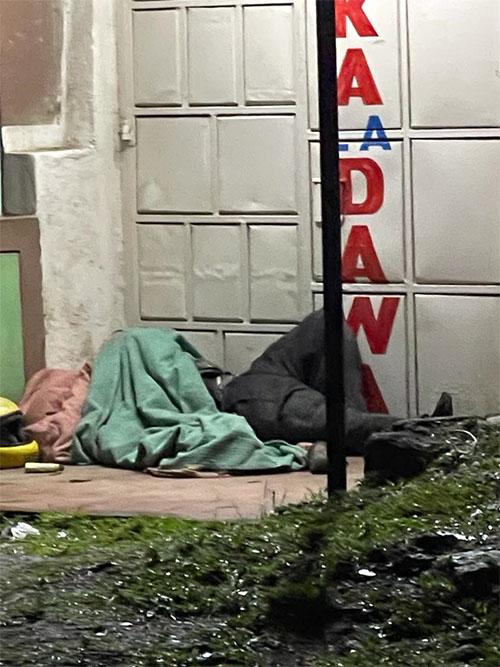 The drizzle invaded my senses as I ran on. I could smell its fresh scent; see its soft drops cascading; feel those droplets forming rivulets on my forehead and hear their soft platter as they fell on the ground besides me. I stuck out my tongue and tasted the fresh rainwater.

Within moments, the drizzle graduated into proper rain, leaving me soaked. There wasn’t another jogger or cyclist in sight. Evidently, the rain had kept people in their houses, in the warm embrace of their duvets. And of each other, I thought as my previous warm embraces chose that moment to race through my mind. Mulhat. Our embraces on two Kenyan islands had been epic on so many levels. Story for another day.

Remember that fast food restaurant that I had seen rats racing around its double deep fryer and cooker? Read about it here. I smiled at it knowingly as I ran past it. The rain had since been replaced by biting cold. Thankfully, seven kilometers of running had already extracted from me bucketloads of sweat.

Forty minutes later, I swung my right leg onto the Outering road overpass’s internal railing. The vastness of this overpass and sturdiness of its railings made stretching here a lot more fun than in my house. Besides, I could stretch as I gazed at the speeding dawn traffic beneath me. The icing on the cake was the fact that by this time, twelve kilometers of running was already behind me. This engenders such a sweet feeling that I can understand why my good friend Opimbi used to say in his usual blunt manner that ‘running is better than sex.’ I don’t agree with him but I totally savor that sweet feeling that mingles with my sweat after a run.